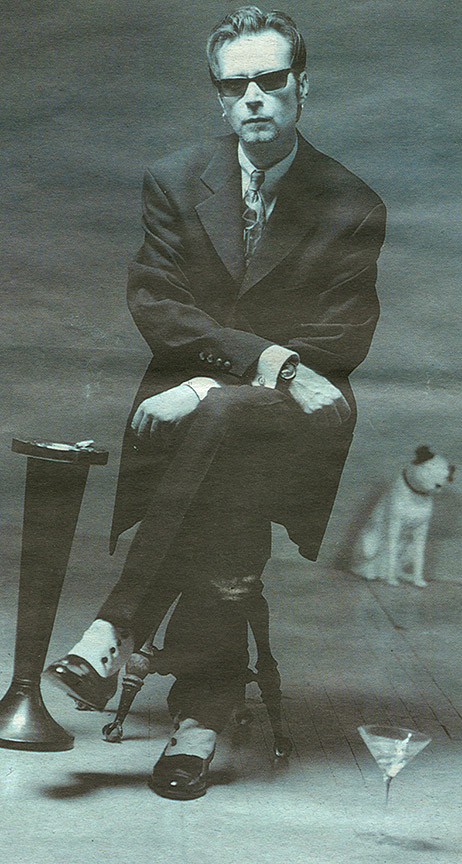 The lounge lizard is getting his rabies shots.

There is some concern that Kane and his wife may have been bitten by a bat, which they discovered in their bed one night last week. There is no actual evidence that they had been bitten – no bite marks, no urge to walk among gravestones late at night – but what’s for certain in this life, anyway?

Not jazz, for sure. Kane’s old band, David Kane’s Them Jazzbeards, seemed like jazz. And the David Kane Quartet might be jazz. But it might also be avant-garde noise: Alongside the traditional instrumentation of drums, bass guitar and keyboards, the band uses samplers, drum loops and the exotic theremin, which is that quavery sound you hear in ’50s sci-fi flicks whenever a flying saucer is landing.

“The Jazzbeards were concentrating on acoustic sounds,” Kane says. “The Quartet is a return to electronics, and beyond that.”

If there is a commonality between the Jazzbeards and the Quartet – and the hushed anticipation of the Margaret Explosion, where the space between the notes seems to breathe – it is in attitude. Attitude that can float in a martini glass, slip into a woman’s spike heels, or be communicated with a tip of the head. It is noir.

It is also lounge, which signals an unacceptable level of cheesiness to some people.

But, “No, it doesn’t bother me,” Kane says. Labels can be peeled off. “In Buffalo, I just ended up getting the best jazz band award. Anything to piss off the real jazz players. You know, when it’s instrumental, and they don’t know were to put it, it becomes jazz.”

He’ll take the trophy. Kane, who is in his early 50s, sees his music as innovative. Innovation equals jazz.

Words tell you what to think. You are under my power. Remove all of your clothing. Now.

See? You’re naked! But music allows listeners to create their own images, their own stories, retain more control over the experience – the soundtrack as launching pad for your own creativity.

The David ane Quartet’s debut, The Life and Times of Guy Friday, is a concept album. Except for some idle chatter, the wordless grooves cast a gritty shadow on a swanky street. In some moments, it even sounds like progressive rock, which is where rock meets jazz. As the comic-book panels that accompany the CD suggest, it is Kane’s life as musician noir.

Kane writes a lot of soundtracks, often for commercials. But he’s scored movies as well. A few years ago, he wrote a soundtrack for the 1929 Russian silent film The Man With a Movie Camera and performed it live with the Jazzbeards during a showing at the Dryden Theatre. More recently, he wrote the soundtrack for in, an independent film that’s being shopped around the festivals. It’s a small-time mob story set in New Orleans. There’s that noir thing again for you. Jazz-organ legend Jimmy Smith even plays some of Kane’s compositions. In is what Kane calls “a reputable” endeavor.

Shadow Creature? Not so reputable. Although shot in Buffalo in 1995, it is the tale of Cleveland terrorized by a half-man, half-zebra mussel monster. This must be how Richard Strauss would feel (if he were not dead) after finding his “Also Sprach Zarathustra” not in 2001: A Space Odyssey but among the cardboard spaceships of Plan 9 From Outer Space.

But the shock wears off. “In retrospect, it’s in all the Media Plays and cult video stores, so I guess that’s OK with me,” Kane says of Shadow Creature. “I understand it does well in Malaysia and the Philippines.”

There is a fine line between noir and schlock. Lesser so between humanoid shellfish and bats. Both are painful but can pay off. “Now I can do the Ozzy cover band,” Kane says as rabies serum flows through his body, “and bite their heads off endlessly without regret.”