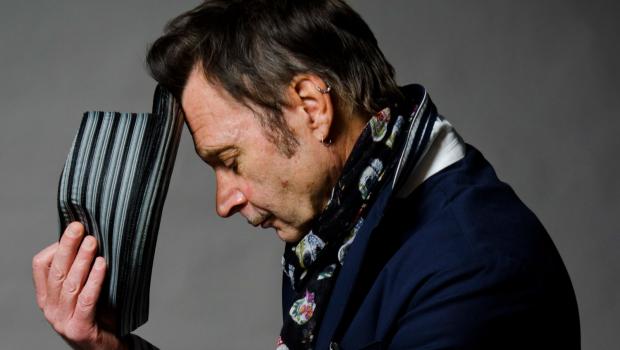 by Kevin J. Hosey
The Public

To celebrate more than 25 years since its release, David Kane’s Them Jazzbeards will perform, in its entirety, Soundtrack for the Story of Kool Daddy-O, the band’s cassette-only debut release from 1989, at 9:30pm Friday, March 27 at the Sportsmen’s Tavern, 326 Amherst Street near Grant Street in Buffalo.

The cassette, which led to Them Jazzbeards’ more than a quarter-century of live shows and recordings, remains breathtaking in its blend of chamber, lounge, and gypsy jazz stylings, along with many other influences.

Having witnessed more Them Jazzbeards shows than I can recall, particularly some wonderful nights at the Cabaret, I contacted Kane and, through the magic of technology, got some impressions from him on one of his many bands (along with Electroman, Nullstadt, the Buddy Diamond Show, and Decay of Western Civilization).

What gave you the idea for this show, playing your first release start-to-finish?
Them Jazzbeards has not performed in clubs for a long time. Every summer we have gotten together to do a few outdoor gigs, which have affectionately become known as Jazzbeard summer camp. I decided to talk to Sportsmen’s about a gig. I was hesitant because we are not exactly Americana. They were more than responsive to the idea. We have done two shows there so far and the response has been nothing short of overwhelming.

Just recently Walter Sopicki, our amazing guitarist, had to take a leave of absence for the sake of pursuing his solo career as a jazz guitarist. We will miss Wally greatly and wish him the best on his solo endeavor. After thinking about the situation, it seemed like a good idea to pull out some older selections, as Them Jazzbeards had no guitar for most of the releases. We seem to be on the every-two-month schedule at Sportsmen’s, and I was thinking of how to keep these gigs interesting and came up with the thought of “Why not start at the beginning and go through the releases one by one in their entirety.” So damn it, that’s what we are doing.

Did you have any idea that Them Jazzbeards would be playing in 2015, more than 25 years after Kool Daddy-O was released?
I started Them Jazzbeards in ’88, largely in response to an ad I saw in a music magazine that stated in bold letters “NOW ANYONE CAN BE A MUSICIAN.” I don’t exactly know why, but it really pissed me off. I had pretty much been performing with electronics since the later ’70s, but decided that I wanted a band that could perform without electricity and guitars. Thus, was the beginning of Them Jazzbeards. I really wanted to get rings made like Elvis’s TCB [“Taking Care of Business,” the motto of Presley’s band]. I got to be the house musician at the Cabaret on Franklin Street run by Erica and Bob. Every week I would put on a completely different musical performance. Other performances included 8 is Enough, with eight synth players—it was kind of Sun Ra meets Eno—and the Fabulous Buddy Diamond Show. And yes, I wanted Lance [Diamond, the late R&B singer] to be my long-lost brother. Born of these events was Them Jazzbeards, which still continues to TCB. Like most bands, it is like having some weird, dysfunctional family. Gizzi willingly took on the moniker Diaper Boy. Sometimes I love them; sometimes I hate them. In the ’90s, I was primarily doing Them Jazzbeards and Terry and the Headhunters. I had the good fortune to be in both of Buffalo’s hardest-drinking bands.

Did I think I would be doing this in 2015? Well, yes and no. No, because at the rate we were going, no one can possibly live that long. And some of us did not. We lost Bart Mitchell, Nullstadt guitarist and Them Jazzbeards beat poet; Kathleen Perry, our viola/flute gal; Mark Freeland, and now Lance and Ted [Reinhardt]. Love and miss you guys. I guess thinking of those guys makes me want to work harder and faster, ’cause you never know.

But also yes, I am not surprised that I am doing it, because [former bass player Jim] Krawczyk and I would always say, “Man, this is the retirement plan.” In putting the band together I was looking for players, not composers, who could work off my ideas. I ended up with the best of the best. I think everybody and the band itself are [Buffalo Music] Hall of Famers with the exception of Michael, but only because they do not have a psychotic minstrel gypsy violin category.

How has playing with so many great musicians over the years affected your creative process?
The best thing about playing with these guys for so long is that feeling of knowing this is good. I think we found our niche instead of getting in a line with a bunch of soundalikes, and it still pleases me.